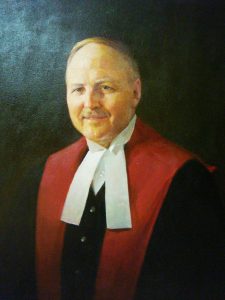 The McDonald is a widely advertised, endowed lecture hosted by the Centre for Constitutional Studies and attended by academics, students, lawyers, judges and the public. Its primary purpose is to provide a diverse audience with an insightful and engaging lecture dealing with issues of a constitutional nature.

The McDonald Lecture is distinct from the other speakers and events the Centre hosts during the year because it is endowed through a fund bequeathed by the family of the late Justice David C. McDonald. The Endowment provides the Centre with sufficient resources to bring in world renowned experts and to host a reception following the lecture. It also allows for advertising to the broader public, thus increasing the size and scope of audience. The lecture itself also serves to showcase the work of the Centre for Constitutional Studies and thus to provide an opportunity for fund development.

Because the McDonald Lecture is endowed to the Faculty of Law and hosted by the Centre for Constitutional Studies, a Centre at the University of Alberta, the lecturer chosen in any given year will depend on specific issues that are deemed by the Centre as important to address, as well as on the funds available through the Endowment.

29th Annual McDonald Lecture (2017)
“Toward the Next Round of Constitutional Talks:
Revising the Constitution Act, 1982″
George Elliott Clarke

24th Annual McDonald Lecture (2012)
“Judicial Legitimacy: How It Is Gained, How It Is Lost”
David Frum

14th Annual McDonald Constitutional Lecture (2002)
“What is a Good Constitution Good for?”
Professor Frank I. Michelman